Roland Mandel, diagnosed with terminal ALS a year ago, experienced one of his final wishes as Pearl Jam invited him on stage at their Berlin concert.

According to a Loudwire report, Mandel is currently wheelchair-bound with only “a few months to live.” It was one of his last wishes to see the band live in Berlin.

Attending the June 21 concert was almost missed, however, as all of the 12 wheelchair-accessible spaces in the 22,000 seat arena had been taken.

A campaign had then started on social media with a #RVMforRoland hashtag to bring awareness to Mandel’s plight. The “RVM” stood for Pearl Jam’s song “Rearview Mirror,” Mandel’s favorite by the band.

Mandel’s friends and family also got involved in the matter, messaging the concert organizer for him to see the band live. The venue was able to secure a spot for him at the side of the stage, granting him an unexpected dream come true.

At the most heartwarming part of the show, the band performed a cover of The Ramones’ “I Believe in Miracles,” and Mandel was wheeled onto the stage to share the moment with the band and fans.

“He should also experience this special night. He worked his ass off to be here,” lead singer Eddie Vedder announced to the audience. He spoke for the band as he said to Mandel, “we love you, Roland.”

Mandel’s wife told German newspaper Taz, “It was so unbelievable. He was so excited, so positive, so full of adrenaline. This stays for eternity.”

You can watch the video of Mandel on stage with Pearl Jam below. 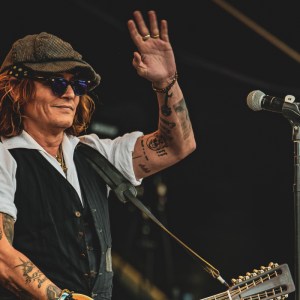