It may have been a star-studded night during The Voice‘s live season finale on Tuesday night (Dec. 14), but it was the contestants that shone the brightest as they showed off their talents one last time before a winner was crowned.

While Ariana Grande was the only coach who didn’t have an act in the finale—Blake Shelton had two finalists (Wendy Moten and Paris Winningham), Kelly Clarkson also had two finalists (Girl Named Tom and Hailey Mia) and John Legend had one finalist (Jershika Maple), that didn’t prevent the “Thank U Next” singer from taking the stage to perform “Just Look Up’ with Kid Cudi.

Early in the night, Tori Kelly and Keke Palmer performed Mariah Carey’s “Christmas (Baby Please Come Home)” with The Voice’s Top 13 finalists backing them. But first, the duo was introduced by actors Matthew McConaughey and Nick Kroll, who both star in Sing 2 (along with Kelly and Palmer). Talk about star power.

Throughout the night, the five finalists, who were waiting to see if they would be crowned the winner, performed with their respective coaches. Hailey Mia performed “Funny” with coach Kelly Clarkson, Paris Winningham performed a rocking rendition of “Love Train” with his coach Blake Shelton, Jershika Maple sang a dazzling version of “O Holy Night” with coach John Legend on the piano, Girl Named Tom teamed up with coach Kelly Clarkson with perfect harmony on “Leave Before You Love Me,” and Wendy Moten nailed her duet of Christina Aguilera’s “Just a Fool” with coach Blake Shelton.

And that was just the appetizer. The stars just kept coming and coming and coming. Walker Hayes performed his hit “Fancy Like,” Ed Sheeran’s performance got off to a rough start when his microphone wasn’t working. However, after a few lost seconds, The Voice Mega Mentor was able to get it back to perform “Shivers”  from his fifth studio album, =.  The one and only Jennifer Lopez made an appearance singing “On My Way,” accompanied by Lucas Nelson on guitar, from her upcoming film Marry Me with Owen Wilson.

Even though Carrie Underwood is a winner of that other show… American Idol, she jumped over to The Voice to join coach John Legend for a special performance of their holiday collaboration “Hallelujah.” Closing out the celebrity performances and returning to The Voice stage, Alicia Keys, who was a Voice coach on seasons 11, 12, and 14, performed her latest single “Old Memories.”

Then it was time to announce the winner of Season 21 of The Voice. Carson Daly revealed that the moment was finally here. It was now time to find out who would win it all. But first, the contestants were asked to say a few words to their coaches.

“Thank you brother I ain’t got much else to say,” Paris Winningham shared with his coach Blake Shelton.

“I love you Blake Shelton, you had my back when I needed you the most in this moment,” Wendy Moten told her coach Blake Shelton.

“Thank you so much for everything you have spoken into my life,” Jershika Maple said to her coach John Legend. “Everything you said is so meaningful.”

“You have really believed in us since day one and that helped us believe in ourselves,” A Girl Named Tom’s Becca said to coach Kelly Clarkson. “Thank you so much for every little thing you did for us.”

“I just want to say thank you, you’ve given me so much confidence. Every time I step out on the stage and just thank you. I cannot thank you enough for everything you’ve done for me. You don’t even know what you’ve done for me,” Hailey Mia said to coach Kelly Clarkson.

Following a commercial break, it was time to announce the winner. The winner of Season 21 of The Voice is Girl Named Tom, leaving Wendy Moten with second place.

“Oh My God,” Clarkson screamed as she walked over to hug her new trio. Just add another win to Clarkson’s column on The Voice (her fourth). 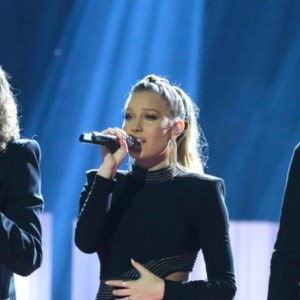