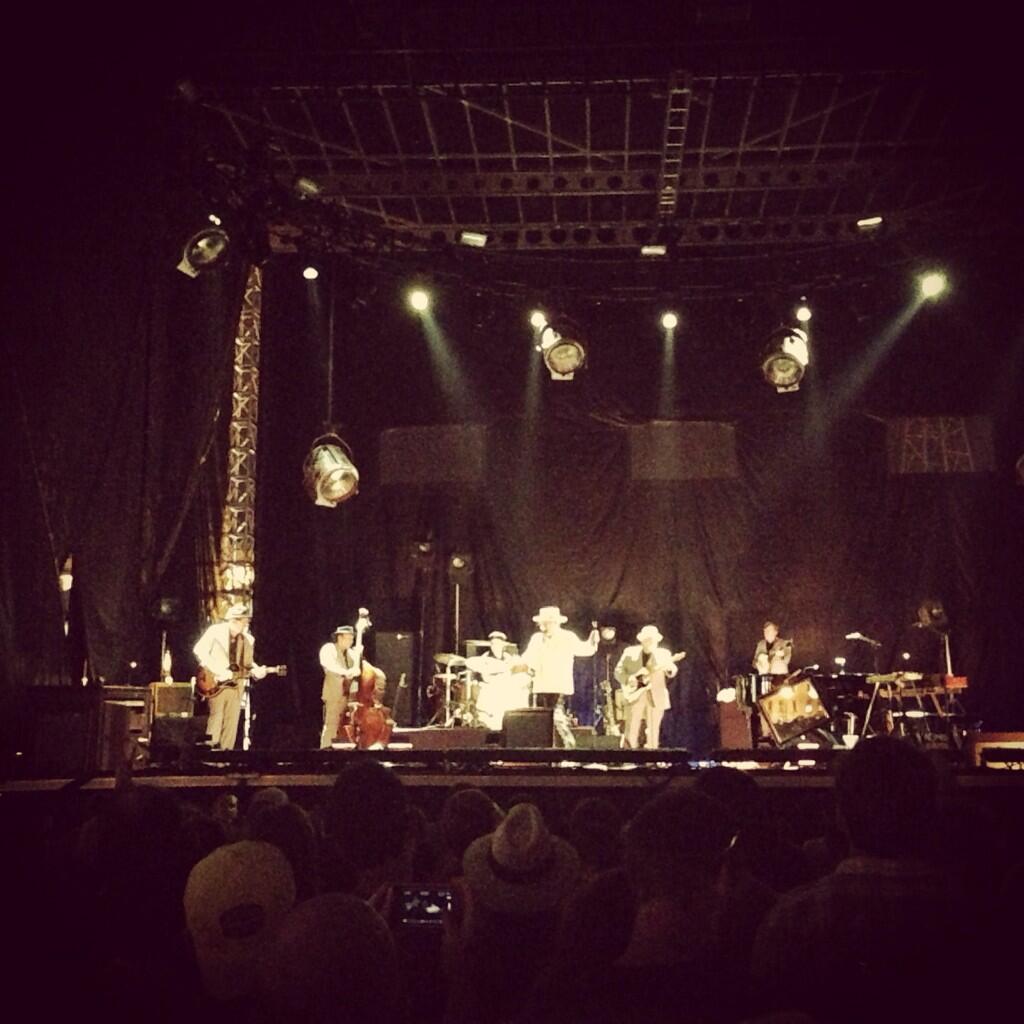 Early one morning the sun was shining, we were laying in the bed. The Americanarama tour was crossing the country, and we would see it next.

Anticipation was high for the brand new festival to reach Nashville. The traveling show is headlined by Bob Dylan and features indie rockers Wilco and My Morning Jacket, with support from Bob Weir; and further on down the road, Richard Thompson and Ryan Bingham. It’s a lineup that initially feels random, yet there are a lot of deeper connections when you gaze closely. Dylan’s songs have been covered by everyone on the bill at some point in their careers, and Dylan used to play with Weir in the Grateful Dead in the late ’80s.

The show kicked off at 5:30 with a literal bang. A mustachioed Weir came out to little fanfare — despite the tie-died Deadheads that peppered the audience — and fooled with the cord plugged into his acoustic guitar, sending a loud pop over the sound system. “Dead Battery,” Weir mused, handing his guitar to a technician. We nervously wondered if this meant Weir was “out of sorts”; he’s suffered health problems of late, which has forced him to cancel some dates. But the veteran road warrior assuaged all fears when he strapped on an electric guitar and gave an impromptu reading of Ratdog’s “Two Djinn” that was captivating and direct.

Weir proved an excellent solo performer, almost like a one-man version of the Grateful Dead Unplugged. He kept a steady rhythm going with a foot pedal, and occasionally peeled off guitar solos that evoked the Dead’s heyday. His voice and guitar playing were in peak form, and while he forgot a lyric here and there — most noticeably during a soulful cover of Dylan’s “Most of the Time” — we can let it be.  Highlights included “Cassidy,” a Dead staple off Weir’s 1972 solo album Ace, and “Friend of The Devil,” a song that Tom Petty chose to bang out at this year’s Bonnaroo.

That wasn’t the last we’d see of Weir. He’s been sitting in with Wilco and My Morning Jacket at previous tour stops, evoking mythical, jam-friendly concerts of yore like The Last Waltz and The Rolling Thunder Revue. The Nashville stop was no different. Weir joined My Morning Jacket during their set for the Dead’s “Brown Eyed Women” and “I Know You Rider,” and later sat in with Wilco for a cover of “Bird Song” and “Tomorrow Never Knows” (more on that in a minute.) 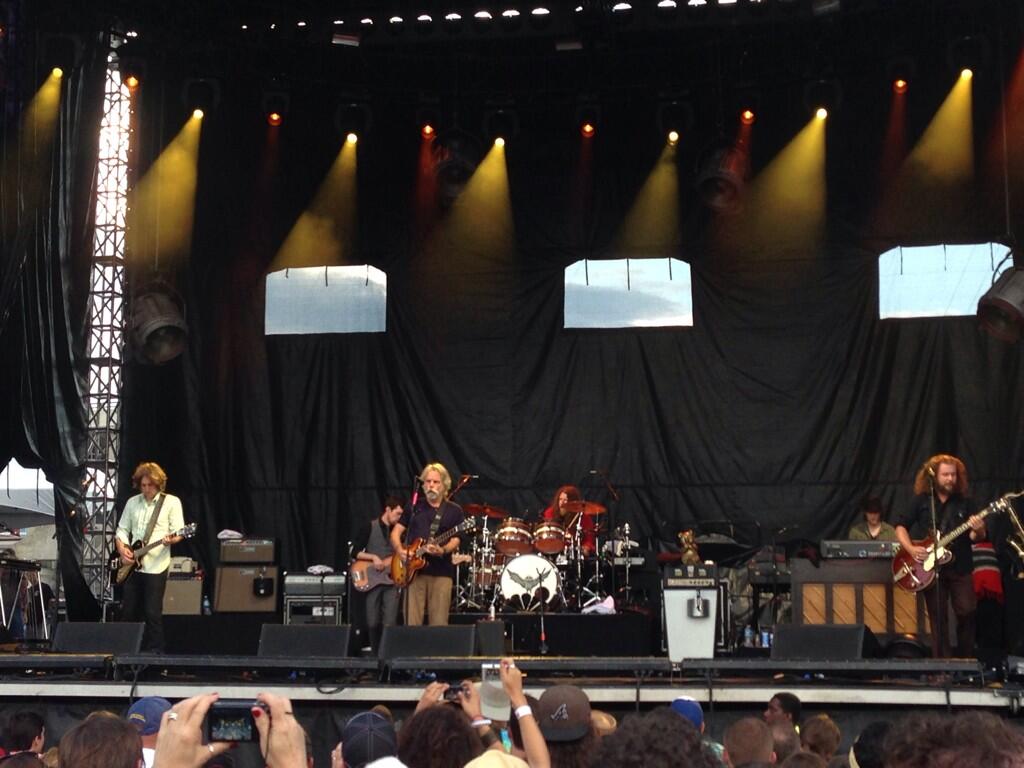 My Morning Jacket are the wild card on this tour. Dylan and Weir are legends, and Wilco are well on their way to a legendary career, but Jim James’ adventuresome southern rock outfit are capable of stealing the show from any one at any time (see: every time they’ve played at Bonnaroo). It’s a combination of James’ incredible voice, equally adept at screaming and crooning, the band’s mastery of tension and release, and the naked beauty of their songs, which holds it all together.

Maybe it was because he’d just woken up, or the fact that the sun hadn’t gone down yet, but James proclaimed that it was a lovely “Sunday morning” more than once.  They opened with “Wonderful (The Way I Feel),” a perfect concert mood-setter if there ever was one. They found their groove with songs like “Master Plan,” “First Light,” and “It Beats 4 U,” and James kept the solos coming on his flying V guitar. Later, as the sunset spread across the sky, My Morning Jacket launched into Circuital’s tribal “Victory Dance,” with its timely references to the “setting sun.” Show = stolen.

Wilco have adapted their set list for the Americanarama tour, reminding everyone that they helped create the genre “Americana” (remember the No Depression movement? Y’allternative? ) by leaning on their older material and songs from Mermaid Avenue.  To that end, they opened with the one-two punch of “Blood Of The Lamb” and the highly poetic “Remember The Mountain Bed,” two standouts from the Mermaid Avenue project. Both songs were written using unpublished lyrics from Woody Guthrie, without whom there would be no Bob Dylan in the first place.

There were impressive twin-guitar showcases like “Impossible Germany” and crowd singalongs like “Jesus, Etc.,” plus a few songs from 2011’s excellent The Whole Love. Watching the band members channel the Grateful Dead with Weir on “Bird Song” was a hoot. And then there was the lysergic, droning “Tomorrow Never Knows,” an amazing Beatles cover with Weir that no one saw coming. Wilco wrapped up their set with “Hoodoo Voodoo,”a Guthrie song written for little kids to enjoy, re-imagined as a rock and roll rave up. “Brush my hair, and kissle me some more,” barked singer Jeff Tweedy.

And then there was Bob Dylan, the reason we were all here. The man, the myth, the legend. Dylan has been digging into songs from 2012’s Tempest lately, and tonight we got a jaunty “Duquesne Whistle,” the sinister, madcap “Early Roman Kings,” and a lyrical “Soon After Midnight” (My heart is cheerful/ It’s never fearful/ I’ve been down on the killing floor/ I’m in no great hurry/I’m not afraid of your fury/I’ve faced stronger walls than yours.”) Watching Dylan perform these days is akin to watching a modern Woody Allen movie — you may take issue with the work, but you still respect the craftsman. So if Dylan’s phrasings sounds the same on “Simple Twist Of Fate” as it does on “Blind Willie McTell,” you still have to bow down to the tunes. He may sing like he’s gargling with turpentine these days, but Dylan’s voice is like strong, black coffee — best appreciated by afficianados, and lacking in cream and sugar to everyone else.

Still, any night that you can go see Bob Dylan, especially when the opening acts are this stellar, is a night worth leaving the house for. Like the poster says, meet him there, beat him there. 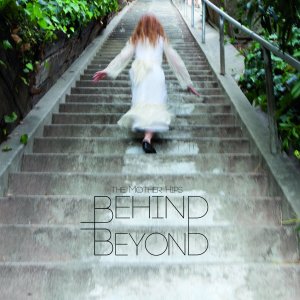 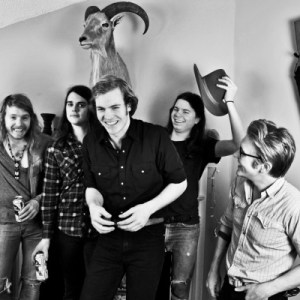