Girl Named Tom takes the familiar adage, “it runs in the family,” to a new level. The musical group—composed of siblings Bekah, Caleb, and Josh Liechty—has only been getting better each week on the competition series The Voice. Monday night, December 6, Girl Named Tom stunned the crowd in its semi-final performance of “River” by Joni Mitchell.

To preface their performance, GNT’s Voice coach and mentor Kelly Clarkson gushed about the trio’s vocal prowess. “I am so excited, I knew y’all make it to the finale… never had a doubt.” Josh then responded to Clarkson that they’re “not there yet,” as it was still the semi-finals.

“But you’re in the semi-finals and this is the performance to make it to the finale,” Clarkson rebutted. “I really feel y’all have a chance of not only being in the finale but winning.”

Clarkson’s confidence is not only heartwarming but largely well-placed. The sibling trio from Pettisville, Ohio, has stolen the spotlight each week with previous performances like Coldplay’s “Viva la Vida,” Ingrid Andress’ “More Hearts Than Mine,” Kansas’ “Dust in the Wind,” and others. Reflecting on the band’s whirlwind of a journey thus far, Josh said: “Two years ago we were just starting out as a band and now we’re in the semifinals, just looking back on how far we’ve come is remarkable.”

The trio’s rendition of “River” then added a layer to a Girl Named Tom’s journey. The three siblings harmonized and riffed off of each other effortlessly.

After their performance, Clarkson commented again on the trio’s musical capabilities. “I think this song, selfishly, is beautiful because it’s my daughter’s name, but also I just love this song for y’all, because it’s kinda coming back to your roots, and it’s a song everyone knows as well,” she said. “This song allows [GNT] to show their individual strengths and their strength as a group.”

John Legend also spoke to the group’s performance: “Every week you are making beautiful music up here, we’re so lucky to have you here. I love you singing Joni Mitchell, I think it’s just cool for you, and it’s so cool she heard you and responded to you,” he said, referring to the gift Mitchell sent Bekah on her 21st birthday. “[Mitchell] is such an iconic artist, and that was such a beautiful, beautiful performance, it was so well done.” 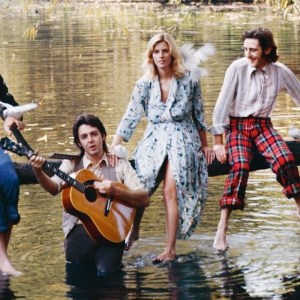