It’s the two-day event we’ve all been eagerly anticipating: the Season 21 finale of The Voice. Monday night, December 13, part one of the finale aired with several performances from the remaining contestants as well as a stunning lineup of guest performances.

One of the Top Five contestants that performed was Virginia-born singer, Paris Winningham. As a member of Blake Shelton’s team, Winningham delivered two powerful performances with an impressive stage presence. His first finale showing was a rendition of “Me and Mrs. Jones” by Billy Paul.

“You are such a classic soul vocalist. It just oozes from you, and I love how you can go from being so smooth and silky to revving it up and hitting those high, powerful, raspy notes too, in such a beautiful combination,” coach John Legend said of Winningham’s performance. “You are such a gifted artist and such a gift to this show.”

“You’re exactly right, it’s the sneak attack that he has,” Shelton replied to Legend’s assessment.

Then speaking to his mentee directly, Shelton said, “Obviously, you just raked in millions of votes, but you also just sold millions of tickets for concerts that you haven’t even booked yet.”

After his finale debut, Winningham returned to sing “Ain’t Nobody” by Chaka Khan and Rufus.

The winner of this season on The Voice will be decided between Winningham, Wendy Moten (Team Blake), Jershika Maple (Team Legend), and sibling trio Girl Named Tom, and 14-year-old Hailey Mia, both from Team Kelly.

Other finale performances include and will include Ariana Grande with Kid Cudi, Jennifer Lopez, Carrie Underwood, Alicia Keys, Ed Sheeran, Coldplay, and more. You don’t want to miss this season finale! 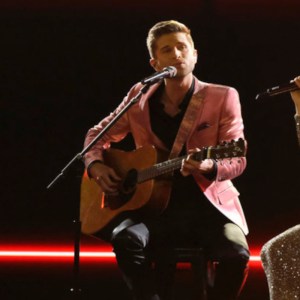