Rage Against the Machine canceled the U.K. and European leg of its reunion tour, which included the Reading and Leeds music festivals. This cancelation comes after frontman Zack de la Rocha was advised by doctors not to proceed with intensive touring following a recent injury. The band will go ahead with their remaining residency shows at Madison Square Garden in New York City.

“Per medical guidance, Zack de la Rocha has been advised that the August and September 2022 U.K. and European leg of the Rage Against the machine tour cannot proceed,” said the band in a statement. “It is with great disappointment that we announce this cancellation.”

Th band continued, “Rage Against the Machine will be finishing their run at Madison Square Garden on August 11, 12 and 14 and then Zack must return home for rest and rehabilitation. The flights, travel time, and rigorous schedule in the U.K. and Europe are simply too much of a risk for a complete recovery. We are so sorry to all of our fans who have waited years to see us and hope to Rage again soon.”

Though a specific ailment was not revealed, de la Rocha has been recovering from a leg injury he sustained during a July 11 performance in Chicago while the band was performing their 1991 hit “Bullet in the Head.” The singer was helped to the side of the stage by crew members and returned to perform the rest of the set while sitting on a stage monitor, and he has been performing shows seated since to not add pressure to his leg.

Run the Jewels’ rapper/producer El-P, who along with partner Killer Mike, is supporting Rage Against the Machine. El-P said that de la Rocha “trooped through what for most people would be an immediate tour ending injury like a true warrior and I know him and the rage crew truly wanted to keep going as we certainly did.”

Rage Against the Machine’s reunion tour was first revealed in 2019 and then delayed in 2020 due to the pandemic. Prior to their recent shows, the band last performed together at their L.A. Rising concert on July 30, 2011, and released their fourth album Renegades in 2000.

The band’s next scheduled tour dates are set to begin in February 2023 and run through April in North America.

Photo Courtesy of the Rock and Roll Hall of Fame 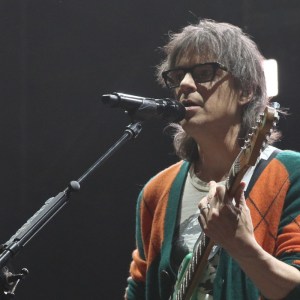