Oh, Post Malone. We hope you’re okay. But what happened? And why again?

Please for the love that’s all good and holy, watch where you step.

Indeed, the songwriter and performer reportedly hurt his ankle again after falling into a hole on stage during his performance. This now marks the second time the platinum performer has done such a thing, the first coming about a month ago in St. Louis in mid-September.

That time, Malone was hospitalized after falling on stage, twisting his ankle. The hole was there for part of the show when he plays acoustic, he’d said.

The second time happened in Atlanta on Wednesday (October 19), during which time Malone rolled his ankle after stepping into a small hole. He went limp and took a moment to compose himself.

“There’s little holes in the middle of the stage where fire comes out of, which is pretty fucking badass, but I just twisted up my ankle a little bit on that hole there,” he said to the crowd on hand after his second fall. “So if my dance moves aren’t 100 percent, you’ve gotta forgive me tonight, ladies and gentlemen. I’mma do my best.”

The first time, Malone also hurt his ribs after falling during his song, “Circles.” Afterward, Malone finished his St. Louis show with a shortened set. He then had to postpone his show in Boston, which had been slated for September 24.

“I’m having a very difficult time breathing, and there’s like a stabbing pain whenever I breathe or move,” he wrote on Instagram after St Louis.

“We’re in the hospital now, but with this pain, I can’t do the show tonight. I’m so fucking sorry,” he continued. “Everyone’s tickets for tonight’s show will be valid for the reschedule that we’re planning right now. Once again, I’m so fucking sorry. I love y’all so much. I feel terrible, but I promise I’m going to make this up to you. I love you Boston, I’ll see you soon.” 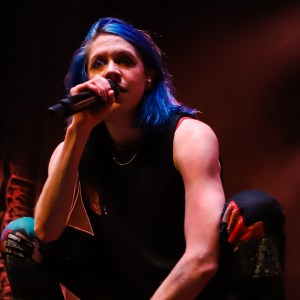